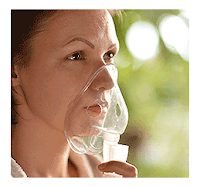 Chronic Obstructive Pulmonary Disease or COPD occurs as a result of progressive damage, inflammation and scarring to the lungs. The lungs, unlike the liver, don't repair themselves through a process of regeneration. Lung tissue repairs itself through a process of scar tissue formation. So if somebody's exposed to various toxins long enough that are toxic to lung tissue, the lung cells can begin to die, and as such, they will begin to cause the production of scar tissue. Over a period of months and years, the scar tissue will accumulate, and the person's lung function, their pulmonary function will gradually begin to decrease and diminish. Their ability to exchange carbon dioxide for oxygen will decrease and diminish. As a result of this, and then the lower levels of oxygen in their blood that occur over time, the person will suffer from things such as, more easily fatigueability, decreased energy, decreased stamina, decreased memory, focus, concentration, and of course, shortness of breath. COPD can be a very debilitating sort of illness, and in severe forms, people wind up in a wheelchair, on oxygen.

Many people have contracted COPD as a result of exposure, for example, to the toxins from 9/11. Many of the healthcare workers and the emergency personnel that worked there for the days and weeks following, who were inhaling some of these toxins, wound up with a World Trade Center lung syndrome, and as result, they wound up with some permanent scarring and damage to their lungs and a certain degree of COPD. More common forms of COPD occur as a result of smoking or the exposure to other sorts of industrial toxins and fumes. Back in the old days, when we still had lead in our gasoline, people that worked for the Triborough Bridge Association, and worked in the tunnels, for example, and were inhaling these sorts of fumes all day long, commonly developed various sorts of lung diseases. People that work in mines, coal miners or other sorts of miners, develop forms of COPD as a result of inhaling these sorts of dusts and toxins on a daily basis.

COPD can also occur as a result of infection. There's a sort of infection that can occur from different types of fungi. Farmer's lung, for example, is one such example of people who are working with straw and hay, and in an enclosed environment where mold can be growing in the hay. Breathing in the mold spores could actually cause an infection in their lungs. And as a result of that infection, you have damage to lung tissue and scar tissue formation. Other sorts of infections can also lead to the formation of lung damage and scar tissue formation. Now when the lungs are scarred, as I said earlier, you're kinda stuck with that. But along with the scar tissue formation, there's also typically an increased level of inflammation. With the inflammation comes an increased production of mucus. So these things are things that we can intervene and help with. We can reduce the inflammation by rebalancing the immune system. We can reduce the mucus that forms, that can clog the small airways, through the use of different types of mucolytic agents, whether it be natural mucolytic agents, or whether it be pharmaceutical ones. There's a wide range of things that we can use to help to liquefy the mucus, get it out of the person's system, so they could breathe easier. Also, exercise over a period of time helps to stimulate other parts of the lungs that haven't been such affected to compensate to a certain extent and improve overall pulmonary function.

One of the better exercises is swimming, for example, because it allows for lots and lots of deep breathing. As you're doing the overhand crawl, you're physically and mechanically expanding the chest cavity, breathing in lots of good air presumably, and thus increasing the oxygen levels in your blood, or exercising all the accessory muscles in your ribcage that help the lungs to expand and contract. Other things that could be done to help with people with COPD, are in the early and somewhat experimental stages with the use of adult stem cells. There's research that shows that if we take our own stem cells that we can get from the bone marrow or from our fat tissue, concentrate them, purify them, and inject them intravenously, that this too can help with pulmonary function to some extent.

When we inject stem cells intravenously, they tend to migrate to areas of chronic inflammation. So first, of course, we'll take a look at the person's blood test to see what their systemic levels of inflammation are, address them as much as possible. So the only information that's really left is that in the lungs where you want the stem cells to go. And then when we infuse them intravenously, they tend to migrate to the areas of lung damage and can, over a period of months, gradually improve pulmonary function. This kind of treatment is still relatively early in our therapeutic armamentarium, but it shows great promise for people with COPD. The bottom line is, the sooner that you address the COPD, the less further lung damage will accumulate, and the better the quality and quantity of life will be.

DR. JESSE A. STOFF is an internationally renowned physician with extensive credentials in clinical immunology and holistic medicine. A graduate of   , he pursued extensive post-doctoral training including a fellow- ship at the     in . He has authored/co-authored countless articles and 8 books including co-authoring the bestseller "Chronic Fatigue Syndrome: The Hidden Epidemic" and The Prostate Miracle.

This article is produced and written by the writing team at IMMUNOLOGY TODAY- The Official Newsletter of Integrative Medicine of N.Y. of Westbury NY-- Edited and co-published by Dr. Jesse A. Stoff exclusively for the purposes of this blogpost (Immunology Today) and rejuvenatesoliutions.com The publisher(s) hold all rights (c) to all elements, images and content herein.  All distribution, sharing or re-posting of this article is only with the express permission from Dr. Stoff and Integrative Medicine of NY (formerly Linchitz Medical Wellness). 265 Post Ave. Suite 380 Westbury, NY 11590  |  516.759.4200  |  www.StoffImmunology.com.   Rejuvenate! is a registered trademark of Intermedia Communications Ltd. All written content in this newsletter is produced by the Stoff Institute for Medical Research (SIMR) exclusively for private distribution at the Integrative Medicine of NY ©2016- All Rights Reserved.

DISCLAIMER: All information provided in this article is intended as general public information and is not intended to treat or cure any disease or disorder. Dr. Jesse A. Stoff, Integrative medicine of NY, nor any individual or practitioner associated with the publishing of this article is not liable for any damages resulting from the use of the information on this article. As a visitor of this blogsite, you acknowledge and agree that any reliance on or use by you of any information available on this Internet web site shall be entirely at your own risk. In no event shall the owner or operator be liable for any direct, indirect, consequential or exemplary damages arising from the use or the performance of this Internet web site, even if the owner or operator has been advised of the possibility of such damages. While every attempt has been made to verify the information on this website, neither the owners, distributors, agents, publishers or their affiliates assume any responsibility or liability for any error, inaccuracies, omissions in the same, or related to results from use of these materials. No party is liable for any direct, incidental, consequential, indirect, or punitive damages arising out of your access to, or use of this blogsite and the contents herein.
Posted by Dr. Jesse A. Stoff at 6:29 AM

Dr. Jesse A. Stoff
Jesse A. Stoff, MD, HMD, FAAFP, DABAM Dr. Stoff is an internationally renowned physician, with extensive credentials in clinical immunology, and holistic medicine. A graduate of New York Medical College, he pursued extensive post-doctoral training including a fellowship at the Royal London Homeopathic Hospital in London, England. He has authored/co-authored dozens of articles and 8 books including co-authoring the bestsellers Chronic Fatigue Syndrome: The Hidden Epidemic and The Prostate Miracle. Currently, Dr. Stoff is the medical director for Integrative Medicine of NY (www.integrativemedicineofny.com)